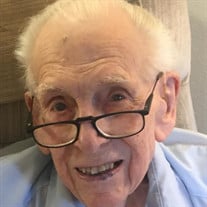 Russell J. Ayling, 101, and a member of the "Greatest Generation", passed away at Otterbein Perrysburg on Saturday, August 4, 2018. Born November 22, 1916, at home on Palmwood Avenue in Toledo, Ohio, to Russell and Viola (Wieland) Ayling, Russ was a graduate of DeVilbiss High School (1934) and the University of Toledo (1940). He married Elaine Teufel, his childhood friend from Berkeley Drive, on November 29, 1941, a week before Pearl Harbor. Shortly after, Russ enlisted in the Army Air Corps and was admitted to officer's training class. He was commissioned as a 2nd Lieutenant in April, 1943 at Yale University. After several months of assembling gliders and repairing aircraft in the states, he crossed the Atlantic and landed in Wales in October 1943. After becoming a 1st Lieutenant, he spent several months in France and Germany with the Army Air Corps Mobile Repair and Reclamation Service that would go to the scene of downed aircraft. He was within 4 days of being sent to the Pacific when the atom bomb was dropped. Consequently, in September 1945, he returned to the states and soon after was discharged. Russell was very proud of his service to his country. Following WWII, Mr. Ayling took his Electrical Engineering degree to Strong Electric in Toledo where he worked for 25 years designing and making motion picture projection lamps and spotlights used in Vietnam. When he left Strong, he worked as a cashier at Raceway Park where his great attention to detail was appreciated. During his lifetime, Russ had various interests and hobbies. In his younger years, he was an accomplished bowler often having his name on the sports headlines of the Toledo Blade. He had three 300 games during his tenure. Later in his life he raised African violets in the basement of his home on Bowen Road, and his "green thumb" was envied by many. He also collected stamps of the world and coins, and he loved watching and supporting his children and grandchildren in their various sporting events. He was a life member of Pilgrim Church and delivered Mobile Meals for several years. Surviving Mr. Ayling is his son, John Ayling of Perrysburg; daughter, Barbara (Ken) Carmon of Bloomville; sister, Marion Carion of California; grandchildren, Erica Ayling, Adam Ayling, Kristyn Carmon, and Beau (Ashley) Carmon, great-grandchildren Ella, Lane, and Quinn Carmon, and nieces and nephews. He was preceded in death by his parents, his wife, and two brothers, Walter and Robert Ayling. Friends are invited to visit after 11 am on Friday, August 10 at Ansberg-West Funeral Home, 3000 Sylvania Avenue, Toledo, OH 43613 where services will commence at 1:00 pm. Interment will be in Toledo Memorial Park. Russell's family would like to thank the staff at West Park Place for the care and support he was given during his 12 years living there. Also a big "thank you" to everyone at Otterbein Perrysburg for the loving environment you provided to Russell during his last 10 months of life. Memorial contributions can be made to Hospice of Northwest Ohio, 30000 River Road, Perrysbur, Ohio 43551 or Pilgrim Church 1375 West Sylvania Avenue, Toledo, Ohio 43612.

Russell J. Ayling, 101, and a member of the "Greatest Generation", passed away at Otterbein Perrysburg on Saturday, August 4, 2018. Born November 22, 1916, at home on Palmwood Avenue in Toledo, Ohio, to Russell and Viola (Wieland) Ayling, Russ... View Obituary & Service Information

The family of Russell J. Ayling created this Life Tributes page to make it easy to share your memories.