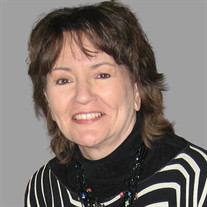 Sandy Pirwitz, age 75, of Toledo, spent her last days and hours surrounded by her family and passed away on Wednesday, April 6, at Divine Rehabilitation Center. She was born October 8, 1946 at Mercy Hospital in Toledo to Paul and Lauretta (Alliman) Crunkilton. She lived a long and eventful life filled with career success, world travel, avid reading and most important to her, a never-ending love and commitment to her family. Preceded in death by her parents and brother Tom Crunkilton, she is survived by her high school sweetheart, best friend, constant companion and husband of 55 years Dick Pirwitz; sons David (Jan) and Paul; granddaughters, Emme and Leslie; and sisters-in law, Marcia Jones and Joan Crunkilton. Sandy met Dick in 1961 in her sophomore year at Devilbiss High School, where both were in acapella choir together, when she asked him out on their first date to the Sadie Hawkins dance and spent barely a day apart over the next 61 years. She transferred to Start High School in 1962 where she was part of Start’s first graduating class in 1964. Following graduation, she transitioned immediately to her first career in nursing, earning her Diploma in Nursing from Toledo Hospital School of Nursing in 1966 and her Registered Nursing Diploma from Maumee Valley Hospital School of Nursing in 1968. She and Dick were married in September 1966 and began to make their life together, living first in North Toledo and then West Toledo where they had their first son, David in 1967 and second son, Paul in 1970. Sandy climbed her way up the medical field working in various positions as a nurse at Toledo Hospital, City of Toledo Health Department Visiting Nurse program, and Saint Vincent’s Hospital. At Saint Vincent’s, she began to build her specialty in infection control as a nurse epidemiologist and became Manager of St. Vincent’s Infection Control program beginning in 1976. Throughout these early years, she and the family began their life-long love affair with travel, including many family camping trips and cross-country journeys. Every summer the family would take a long road trip to different destinations across the United States, from Maine to California and Canada to Florida. Experiencing life and the world through travel with Dick was a constant throughout Sandy’s life, including many trips throughout Europe, Mexico, the Caribbean and of course all across the United States. In all they’ve been to four continents, making countless friends and memories along the way. Her favorite trips included traveling to see her son and family on Washington’s Olympic Peninsula (especially in 2005 when they traveled for the birth of their granddaughter Emme, after which she has been known as “Mimi”), their 35th anniversary cruise with stops in Greece, Turkey and Northern Africa and a 10-day food and wine tour through Italy, one of many trips with their local gourmet group, Le Bec Fin. Fellowship and extended family was a big part of this phase of her life. The family was active at Augsburg Lutheran Church where Sandy was the first woman ever elected to Augsburg’s church council. These years were also filled with support of her children and their various sport and music interests and events and boisterous attendance of the annual Alliman family reunion. Her sons and their families were never-ending sources of pride and joy for her and she, in turn, was truly inspirational to them. As her children transitioned to adulthood in the 1980s, Sandy renewed her commitment to her epidemiology career and education. She earned her Bachelor’s degree in nursing from University of Toledo in 1983 and her Master’s degree in Infection Control & Epidemiology from the prestigious University of Pennsylvania in 1985, before accepting a position as Manager of Infection Control at University Hospitals at Case Western Reserve in Cleveland. In 1989, she rose to one of the top Infection Control Manager positions in the U.S. at The Cleveland Clinic, where she remained until 1998. Throughout her epidemiology career she was considered a pre-eminent authority, publishing many papers, was an instructor in policy and procedure and was heavily involved with her field’s national association APIC, where she held various committee and leadership positions, including chair of the National Certification committee. An ex-smoker, she also taught smoking cessation classes throughout her career and was a part-time proofreader for the Toledo Free Press on the side. Sandy was also an avid shopper and fashion diva and, never one to remain idle for long, she finished up her medical career at Vencor Coma Care Center in Lincoln Park, MI, while concurrently opening a women’s fine clothing and accessories consignment shop and ran her Sandy’s Stuff shops for the next 11 years at several locations throughout West Toledo. During this time as a small business woman, she became involved as a member of the local chapter of Business Networking International and knew she had found her next calling. In 2008, she closed her shop and joined BNI full time as a Director and Trainer overseeing multiple chapters and took great pride in helping small business owners throughout Northern Ohio to build their brands and maximize their marketing and referral strategies. She remained active with BNI until she finally retired from work life in 2016. During this period, she also was a trainer for Connext Nation and a founding board member of the non-profit group Women of Toledo, supporting career development for women from all walks of life. The family wishes to thank everyone for their thoughts and prayers during recent days and especially the staffs at ProMedica Hospice and the dementia unit at Divine in Sylvania, who lovingly cared for Sandy in her final months. At Sandy’s request there will not be a memorial service. Stay tuned for a possible future celebration of Sandy’s life. Please direct any donations to The Alzheimer’s Association or The ProMedica Hospice Memorial Fund.

Sandy Pirwitz, age 75, of Toledo, spent her last days and hours surrounded by her family and passed away on Wednesday, April 6, at Divine Rehabilitation Center. She was born October 8, 1946 at Mercy Hospital in Toledo to Paul and Lauretta (Alliman)... View Obituary & Service Information

The family of Sandra Kay "Sandy" Pirwitz created this Life Tributes page to make it easy to share your memories.