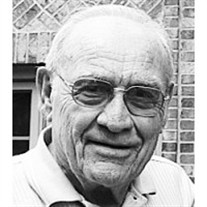 Sarafine J. Stresen, 89, of Sylvania, Ohio passed away on Wednesday, August 26, 2009. He was born in Toledo, Ohio on February 14, 1920, to Michael and Mary (Siemientkowski) Strzesynski. Sarafine graduated from Woodward High School in 1938. He entered into military service in 1942 and was assigned to the Army Air Force 9th Troop Carrier Squadron serving in the South Pacific. After being honorably discharged in 1945, he married Helen Menke on May 13, 1947. Sarafine was an excellent baker and managed Menke Bakery until his retirement in 1980. He continued to bake for several more years at Haas's Bakery. In his early years, Sarafine enjoyed playing baseball for the Collins National All-Stars and later became an avid bowler and golfer in the Toledo Bakers' Leagues. Sarafine was a life-long member of Christ the King parish, where he served as an usher for many years. He was also a member of the Knights of Columbus. He was preceded in death by his wife of 42 years, Helen Menke Stresen; his parents and brothers, Stanley Michalak Jr., John Michalak and Edward Michalak. Surviving are his daughters, Marie (Gordon) Ulrey of Savannah, GA, Janet (Walter) Simer of Colleyville, TX, Linda (Larry) Fioritto of Toledo and his son, Paul (Karen) Stresen of Toledo; grandchildren, Amanda and Morgan Fioritto and Aaron Stresen. Also surviving is Sarafine's loving partner of 18 years, Evelyn Bublick. Friends and family are invited to visit at 9 a.m. on WEDNESDAY, at Christ the King Church followed by a memorial Mass at 10 a.m. Donations in Sarafine's memory may be sent to the American Macular Degeneration Foundation and the American Heart Association.

Sarafine J. Stresen, 89, of Sylvania, Ohio passed away on Wednesday, August 26, 2009. He was born in Toledo, Ohio on February 14, 1920, to Michael and Mary (Siemientkowski) Strzesynski. Sarafine graduated from Woodward High School in 1938. He... View Obituary & Service Information

The family of Sarafine J. Stressen created this Life Tributes page to make it easy to share your memories.

Sarafine J. Stresen, 89, of Sylvania, Ohio passed away on Wednesday,...