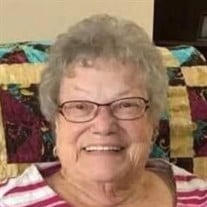 Shirley D. York, 87, of Toledo, OH went home to be with the Lord on Saturday, May 9, 2020. She was a devoted wife, mother, grandmother and friend who will be deeply missed and fondly remembered by all who had the privilege of knowing her. She was born on May 30, 1932 in Ware, MA, to Lawrence and Mae Rowe. Her father’s job eventually took them to Knoxville, TN. She was wed to the love of her life, Donald York, on Oct. 19, 1953; they were married for 40 years until he passed in 1993. Shirley and Don settled in Toledo, OH where they raised their children. They spent many years vacationing at their property up north in MI, where they enjoyed snowmobiling in the winters. Her family was the most important thing in her life. Shirley was a long-time member of Hope United Methodist church, where she served in many positions over the years. Life handed Shirley more than her share of sorrows, but she never let that color her positive outlook on life. Those trials helped her raise her children to be strong, capable adults. Always humble, she never sought credit for helping those in need. If something needed to be done, she found a way to make it happen. Shirley loved NASCAR, football, sweat tea, and boneless chicken. She also loved to travel and enjoyed spending time with her close friend, Bev; oftentimes just for long car rides and good conversation. In the early years, Shirley worked as a drapery specialist for JC Penney and Montgomery Ward. After raising her children, she worked in child care. She eventually started an in-home daycare where she became “Grandma Shirley” to the next generation, including her own grandkids. Children were drawn to her and she delighted in caring for and showering love on them. When you told her ‘I love you’, her response was always ‘Love you more’. She once told her granddaughter, “Possessions don’t matter in the least, but being a good, fair, honest person makes you feel that you’ve accomplished something. And that’s the best feeling of all! God wants us to prosper and he wants us to be good, too” Shirley is survived by her daughters; Kimberly (John) Houck, Michele (Kevin) Leslie, grandchildren; Daniel York, Adam York, Katelyn Houck, Karey Houck, Kendal (Donald Bond) Leslie, and Reid (Katlin) Leslie. She is preceded in death by her parents, her husband, brother; Robert Rowe, son; Randall York, and grandson; Kyle Houck. The family would especially like to thank the staff at Kingston Residence of Sylvania, Shirley’s home for the last year, for their exceptional care. You will never fully understand how much we appreciate all of you. Memorial donations may be made in her memory to Quilts of Compassion, P.O. Box 350296, Toledo, OH 43635. ****FUNERAL SERVICES WILL BE PRIVATE****

Shirley D. York, 87, of Toledo, OH went home to be with the Lord on Saturday, May 9, 2020. She was a devoted wife, mother, grandmother and friend who will be deeply missed and fondly remembered by all who had the privilege of knowing her. She... View Obituary & Service Information

The family of Shirley D. York created this Life Tributes page to make it easy to share your memories.