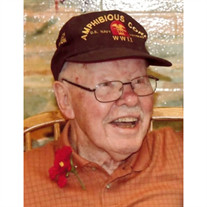 Sigmund Willinger, 92, of Toledo, passed away Sunday, May 22, 2016, at Hospice of Northwest Ohio, Toledo. He was born August 2, 1923, in rural Bavaria. Sig was brought to the United States by his parents as a young child. He graduated from Whitmer High School with the Class of 1941, and served in the U.S. Navy, in the South Pacific during World War II, earning the Asiatic Pacific Medal with four stars, among other citations. In 1951, Sig married Betty Ruesh. Sig worked for Owens-Illinois for 35 years, and traveled often for the company as a welding specialist. He belonged to the American Legion's, Vernon McCune Post # 132, in West Toledo and was a lifelong member of Most Blessed Sacrament parish. Sig had a strong work ethic and for many years poured concrete on weekends, often doing sidewalks and garage floors for friends and coworkers. He enjoyed nature, planted fruit trees and fed the birds in his yard. Sig was a dedicated family man. He is survived by his wife of 64 years, Betty Willinger; children, Anne Spears, David, Mary Ellen (Ken) Herman, Mark (Theresa), Robert, Matthew (Nikki); 14 grandchildren; 14 great-grandchildren and sisters, Betty Soldner and Mary Ann Schneider. Sig was preceded in death by his parents, Frank and Grace Willinger and by his sister, Frieda Willinger. Friends are invited to visit from 3-8 p.m. Thursday, at the Ansberg-West Funeral Home, 3000 Sylvania Avenue, (between Secor and Douglas Roads), where the rosary will be recited at 7 p.m. followed by Vernon McCune American Legion Post #132 services. Prayers will begin at 11 a.m, Friday, from the funeral home, followed by the funeral mass at 11:30 a.m., at the Most Blessed Sacrament Church, (2240 Castlewood Drive at Bellevue Road). Interment will follow at Resurrection Cemetery, where the Lucas County Veterans Burial Corps will conduct services. Memorial contributions may be made to the Most Blessed Sacrament Church or Hospice of Northwest Ohio. The family would like to thank the staff of Hospice of Northwest Ohio for the wonderful care given to Sig. Online condolences may be sent to the family at www.ansberg-west.com

Sigmund Willinger, 92, of Toledo, passed away Sunday, May 22, 2016, at Hospice of Northwest Ohio, Toledo. He was born August 2, 1923, in rural Bavaria. Sig was brought to the United States by his parents as a young child. He graduated from Whitmer... View Obituary & Service Information

The family of Sigmund Willinger created this Life Tributes page to make it easy to share your memories.