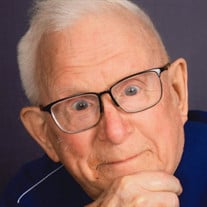 In the early hours of the morning on December 14th, 2018, Stanley Osborn passed on at Ascension St. John (Macomb) Hospital at the age of 97. Stanley was preceded in death by his father, Luther, and his mother, Grace, his older brother, James, and older sisters, Mable and Maretta. He is survived by two children, Judy Bosak and John (Beth) Osborn, two granddaughters, Patricia Bosak and Elizabeth (Tim) Woodruff, and a great-grandson, Aaron Woodruff. Stanley was born on June 20th, 1921 in Toledo, Ohio, to Luther and Grace (Meachen) Osborn. He graduated from Waite High School in 1939. Stanley wanted it known that he was ready and willing to serve his country, but when he attempted to join the military, he was turned down. The recruitment office used such measures as height and weight to determine a soldier’s readiness for battle, not his patriotism or bravery. Stanley instead contributed to the war efforts through his tool and die making profession, first with Reliable Machine & Tool, then Cooper Tire Corp., where he helped finalized such molds as the original Reach toothbrush and the Avon Little Slugger hairbrush. He remained on the job until the age of seventy-two. On August 4th, 1945, Stanley married the only woman for him – June Lewis, and they had two children together, Judy (Bosak) and John. Stanley had three great passions in his life: family, faith, and service. Everyone who knew Stanley knew how much he cared for his church: The Lutheran Church of Our Savior. Just around the corner from his home, he volunteered there from its inception to May of 2018. He served on most councils/committees and assisted with any duty asked of him by the current pastor, most notably as head of the worship committee, organized the ushers, cleaned the pews, and even refilled the pop machines. Stanley also volunteered with Feed Your Neighbor on a regular basis. His children have fond memories of him at Work Week at Camp Mowana, while many schoolchildren at Elmhurst and Toledo Public Schools remember him from his time with the Grandparents program, teaching them how to use the “new” computers in their labs. Through his long and highly respected history with the Masonic Order, Stanley served his community. He served as Past Master of the Rubicon Lodge beginning in 1996-1997. He was also Past High Priest of the Fort Meigs Chapter, President of the High-Twelve, and a Shriner, where he volunteered with the Shriner Circus 40+ years. Time and love were always in abundant supply when it concerned the people who needed Stanley Osborn. He led by example, and may his light guide those left behind towards a path of service, faith, and love. Friends are invited to visit from 4:00 PM to 9:00 PM Friday at Ansberg-West Funeral Home, 3000 Sylvania Avenue, where Masonic services led by the Rubicon Lodge will be held at 7:00 PM. Funeral services will be held at 1:00 PM Saturday at The Lutheran Church of our Savior, where friends are invited to gather after 12:00 PM. Interment will follow in Toledo Memorial Park. Condolences for Stanley’s family may be expressed online at

In the early hours of the morning on December 14th, 2018, Stanley Osborn passed on at Ascension St. John (Macomb) Hospital at the age of 97. Stanley was preceded in death by his father, Luther, and his mother, Grace, his older brother, James,... View Obituary & Service Information

The family of Stanley L Osborn created this Life Tributes page to make it easy to share your memories.