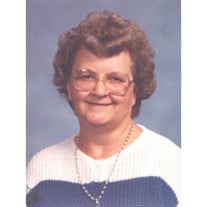 Susan Margaret Harley, 92, passed away peacefully on Monday, January 14, 2013, at her home in Toledo surrounded by loving family. Sue was born to Roy and Emma Johnson on October 8, 1920, in Sylvania. She was a faithful and devoted servant of the Lord and was a truly kind-hearted, compassionate, extremely loving, caring and thoughtful woman. She leaves this world just eight days after Richard J. Harley, her dedicated and loving husband of 70 years ~ and theirs is a romance the likes upon which fairy tales are based. Their true love, unique bond and allegiance to one another and to family formed a lasting legacy that shall forever be honored, remembered and celebrated through traditions they wove throughout the fabric of their entire lineage. Sue was a member of St. Mary's Church for 57 years and a member at St. Clement Church for 38 years, where she also served as a Eucharistic minister. At both churches, she was a member of the Altar Rosary Sodality, through which she helped clean the sacristies and provided plants for the annual rummage sales. Sue was a member of the Ladies Mission Group at St. Mary's, where she helped box up clothing that was shipped to nuns in the British Honduras and used to clothe the poor. As the wife of a retired United States postal carrier, she was also a member of the Women's Letter Carrier's Auxiliary. Sue's greatest and proudest role was that of dedicated wife, mother, grandmother, great-grandmother, aunt, friend, neighbor and homemaker. She was a spectacular cook and baker ~ no one could beat her pie crusts; pies; jams and jellies; or her Christmas cookies and goodies; and her chicken and dumplings, turkey and noodles, and corned beef and cabbage were out of sight. Sue loved gardening, and grew fresh vegetables and berries in her backyard. Each season, she could be found canning her special hot pickles. Everyone delighted when she shared the pickles, veggies and fruit with them. She took great pride in her plants and flowers and enjoyed reading, crocheting and quilting. Sue made quilts for each of her children and baby quilts for most of her grandchildren, as well as baby balls and booties. She also enjoyed riding her bicycle, which she did well into her 80s, and playing cards ~ Euchre and Pinochle, especially; both at which she was skilled and competitive. Most of all, however, her great joy was spending time with her very large family, which always brought a warm, loving smile to her beautiful face. She is dearly loved and will be missed immensely by all those who cherished spending time with her. Sue is survived by eight children -- RuthAnn (Robert) Carr, Richard (Joselyn) Harley Jr., Roy (Patricia) Harley, RoseMarie (David) Shenofsky, Pamela Harley, Leon (Deborah) Harley, Rita Harley, Gerard (Susan) Harley; 28 grandchildren, and 52 great-grandchildren. She is also survived by sisters, Leona Chovanec, Ruth Johnson and Mary Jo DiValerio. She was preceded in husband, Richard J. Harley; their infant son, Robert; grandson, Eddie Ligman; her parents; brothers Phillip, Lawrence, Mark, Bernard, William and Leon Johnson; and sisters Lois Forgette and Marie Dominic.

Susan Margaret Harley, 92, passed away peacefully on Monday, January 14, 2013, at her home in Toledo surrounded by loving family. Sue was born to Roy and Emma Johnson on October 8, 1920, in Sylvania. She was a faithful and devoted servant of... View Obituary & Service Information

The family of Susan M Harley created this Life Tributes page to make it easy to share your memories.