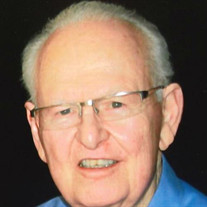 “He lived life his way” is the perfect description of Ted Powers, and he started at birth. Soon after his father left for work on March 13, 1936, saying emphatically, “No son of mine will be born on Friday the 13th,” Ted was on the move and proved his dad wrong. How his dad knew he was a boy, we’ll never know. Maybe because his wife had already blessed him with three daughters, and he felt it was time for a change. From beginning to end, Ted would live and die “his way,” which is a good thing, because he brought many, many blessings to the world through his unique living of life. Born and bred a Toledo boy, Ted worked as a teenager in his dad’s gas station on Monroe Street, and this job left him with a lot of knowledge about vehicles, a respect for mechanics, and a distaste for grease and grime. He served proudly, and with deep dedication, in the U.S. Marines in the 1950s, and his fierce love for his country remained with him all through life. Ted feared nothing, which helped tremendously when he decided lions, tigers, bears, large birds and many other creatures needed sanctuary for a variety of reasons. His favorites were Ginger the tiger, who napped at the foot of his bed; Tiki the lion, who loved the coolness of the bathtub; and Baby Bird the macaw, who yelled, “Bye, Dad, bye,” each time Ted carried out a suitcase in pursuit of another travel adventure. Ted loved his Yorkies – seven throughout the years. He often laughed how the Yorkies had more control over him than the big cats ever did! His disdain of fear allowed him to drive – not fly, from northern Ohio to as far south as Mexico, where he first fell in love with tropical birds, raising some of them from hatchlings to adults. Eventually, Ted found his true business passion – dealing in antiques and conducting estate sales. He and his wife Sheila, owners of Ancestor House Antiques, shared their extensive knowledge of antiques with customers, at show-and-tell meetings, and at antiques shows in several states. This business career spanned over 40 years, and the Powers team earned a strong reputation for fairness and honesty that never wavered. Ted loved his God, which led him to becoming Catholic through the RCIA, a formation process for prospective converts. It wasn’t long before he found himself active as an RCIA director with his wife Sheila, serving alongside the most dedicated of RCIA Teams, first at St. Clement and later at Regina Coeli. Ted was also a Eucharistic Minister for many years. Eventually, the ravages of Alzheimer’s stole many of his memories and abilities, but his love for his personal Lord and Savior and his wife never faded. He knew them both until the very end, when he passed from this life into the next, on February 10, at Charter Senior Living. Leaving to cherish his memory is Sheila, his wife and partner of 41 years, children, grandchildren, great-grandchildren, nieces and nephews, and many, many friends. Deepest thanks to “Patsi,” loyal caregiver, lifesaver, and friend, and to ProMedica Hospice nurse Christina. Visitation will take place Friday, February 15th from 9-11am, at St Clement Church . 3030 Tremainsville Rd. 43613, followed immediately by Mass of Christian Burial. Presider Fr. James Auth, with con-celebrants Fr. Raymond Sheperd and Fr. Francis Speier. Interment will be private. In lieu of flowers, donations are requested for the St. Clement Maintenance Fund, or Critter Crusaders, 14023 Apple Avenue, Lakeview, Ohio 43331

The family of Ted Powers created this Life Tributes page to make it easy to share your memories.

“He lived life his way” is the perfect description of Ted Powers,...