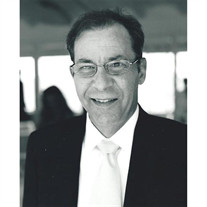 Terry Alan Burns was born on April 3rd, 1948 in Paris, France to Lt. Col. David Burns and Irene (Lessieux) Burns. He passed away peacefully on April 19th, 2016 at the same home he grew up in, built by his father in 1954.Terry is remembered as a loving son, brother, father, grandfather, and friend to all that knew him. He was also an athlete, teacher, a bit of a salesman, coach, and one of the most selfless people you will ever meet. Terry came to the United States on the USS America at age 3 from Paris, France. He grew up in Old Orchard and graduated from De Villbiss High School in 1966. He was a proud member of the varsity baseball and basketball teams in high school where he forged lifelong friendships with his teammates. Terry earned his Varsity Letter in baseball and basketball in each of his freshman through senior years, one of the few to earn that honor in his school's history. He went on to play basketball in college at Wittenberg University, then the #1 small college team in the nation. Terry transferred to Adrian College where he continued to play basketball and most importantly where he met and married Susan (McSeveny) LeFere, the mother of his two boys. He graduated from the University of Toledo with a degree in Education and chose to settle in his hometown to raise his family. Terry spent his early career as a high school teacher and coach of both football and basketball. He later transitioned into a successful career in sales. Paramount to his professional life were his personal relationships. Terry was a son. He is survived by his mother, Irene, and preceded in death by his father, David. His father was a decorated officer and his hero. His mother is a strong, independent immigrant from France who he loved dearly and took care of in recent years during difficult times. Terry was a brother. He was the oldest of three boys. Terry is survived by Randy Burns, his wife Ruby and his children Josh and Dustin and Craig Burns, his wife Martha and their children Kelly, Emily, Olivia and Andrew. He loved both of his brothers more than he probably ever expressed in words. Terry was a father. He is survived by his two sons, Brandon and Brett. He was always there for his sons no matter their age or circumstance. He always put his kids first and never let them know that anything was ever wrong in his life. Terry was a grandfather. He is survived by his two granddaughters, Macyn and Kendall Burns, of Brandon and Anita Burns. He is also survived by his two grandsons, Graham and Ben Burns, of Brett and Melissa Burns. He loved spending as much time with his grandchildren as possible. Terry was a friend. His genuine concern for others, his sense of humor, and his ability to get along and have a conversation with anyone made him a lot of friends. To know him was to be his friend. He will be missed by many. Friends are invited to visit from 1:00-3:00pm on Saturday, April 30, 2016 in the Ansberg-West Funeral Home, 3000 W. Sylvania Ave, Toledo, OH 43613 where a memorial service will follow beginning at 3:00pm. Those wishing to send his family online condolences may visit www.ansberg-west.com.

Terry Alan Burns was born on April 3rd, 1948 in Paris, France to Lt. Col. David Burns and Irene (Lessieux) Burns. He passed away peacefully on April 19th, 2016 at the same home he grew up in, built by his father in 1954.Terry is remembered as... View Obituary & Service Information

The family of Terry Alan Burns created this Life Tributes page to make it easy to share your memories.