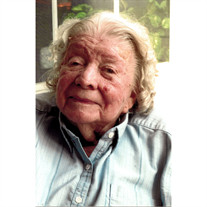 Thelma Lovett, age 97, passed away on January 2, 2015. Preceded in death by Fred, her loving husband of 62 years, Thelma was born on June 5, 1917 to the union of parents, Daniel Zingg and Edith (Lentz) Zingg. She was reared in North Toledo, moving to Point Place in 1951. Since 2005, Thelma has resided at the Kingston Residence of Sylvania, Ohio. Thelma was a fulltime homemaker after the end of WWII, devoting herself to her family and to volunteering at Messiah Lutheran Church. She will always be remembered for the smile on her face and for her witty sense of humor. Left to cherish her memory is her son, Rick (Terry) Lovett; grandchildren, Kevin (Lauren) Lovett of Colorado and Kristin (Brad) Foster of Florida, as well as two great granddaughters, Marly and Andi Lovett. Also surviving is Thelma’s sister, Betty (John) Korzeniewski of Maumee. In addition to her parents and husband, Fred; Thelma was preceded in death by her sister, Mary Crabtree and her brother, Daniel Zingg. Thelma’s family would like to thank the staff of the memory care unit at the Kingston Residence of Sylvania, who gave Thelma such tender care while she was a resident there. To Thelma, the compassionate staff at Kingston were like family and they made each day pleasant for her. A funeral service will be held 2:00pm Tuesday at Ansberg-West Funeral Home3000 Sylvania Avenue, Toledo, Ohio 43613 where friends are invited to visit after 1:00pm. Interment will follow in Toledo Memorial Park. In lieu of flowers, Thelma’s family suggests that any memorial s in her name be given to Messiah Lutheran Church, Toledo. Even though Thelma was unable to attend services at Messiah since her health began to fail in 2004, she remained close to her church home through visits by pastors and lay-persons and through remembrances in weekly prayers. Online condolences may be left for Thelma’s family at www.ansberg-west.com

Thelma Lovett, age 97, passed away on January 2, 2015. Preceded in death by Fred, her loving husband of 62 years, Thelma was born on June 5, 1917 to the union of parents, Daniel Zingg and Edith (Lentz) Zingg. She was reared in North Toledo,... View Obituary & Service Information

The family of Thelma D Lovett created this Life Tributes page to make it easy to share your memories.