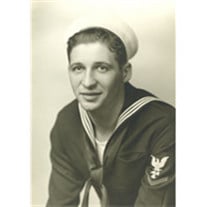 Theodore A. “Ted” Harder, age 81, passed away May 17, 2010 at Hickory Ridge of Temperance. He was born October 8, 1928 to August and Carrie Harder in Toledo. A graduate of Woodward High School, Ted honorably served his country in the Navy for 5 years during World War II and the Korean War. Ted was proud of his service, and was a member of the worldwide VFW, American Legion Argonne Post 545 and the USS Chara Association. He worked for Toledo Edison for 38 years before retiring in 1990 and served as a volunteer fireman at Adams Twp #2. He enjoyed coaching basketball and softball at Augsburg Lutheran Church for 15 years. Ted also enjoyed traveling throughout the United States, attending naval reunions, playing Euchre at Harborview Yacht Club, but most of all spending time with his family. Ted is survived by his loving wife of 59 years, Darlene; daughter, Cheri (Herb) Arend, sons, Clyde and Ted (Deb) Harder; grandchildren, Alicia (Glen) Wright, Lynn Smith, Jennifer (Richard) Toda, Derrick (Nicci) Harder, Tony (Angie) Harder; great grandchildren, Isaiah Wright, Wyatt and Reagan Smith, Jason and Kaylee Toda; sister in law and brother in law, Judy and Bill Creswell and many beloved nieces, nephews and special friends. He was preceded in death by his son, Paul Harder and brothers, Bob Harder and James Childers. Services will be held 11:00am Friday at Ansberg-West Funeral home 3000 Sylvania Avenue where friends are invited to visit from 2:00 to 9:00pm Thursday. Interment in Toledo Memorial Park. Memorial contributions may be made to Erie West Hospice of the charity of the donor's choice. Online condolences may be left at www.ansberg-west.com

Theodore A. &#8220;Ted&#8221; Harder, age 81, passed away May 17, 2010 at Hickory Ridge of Temperance. He was born October 8, 1928 to August and Carrie Harder in Toledo. A graduate of Woodward High School, Ted honorably served his country in... View Obituary & Service Information

The family of Theodore Harder created this Life Tributes page to make it easy to share your memories.