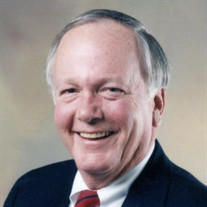 Thomas A. Baither died peacefully on Thursday, December 20 at Hospice of Northwestern Ohio after a battle with Merkle Cell Cancer. Tom was born on December 2, 1942 to Cordelia F. and Charles P. Baither, Sr. He attended Ottawa Hills Elementary School, Western Reserve Academy, Washington and Lee University and graduated from the University of Toledo with a dual degree in Economics and Spanish. He worked in the financial investment area of the business world, most recently as a partner in Touchtone Wealth Partners with UBS Financial Services. Tom enjoyed spending time at his Wamplers Lake cottage in Southeast Michigan, having spent his younger days water skiing and doing other lake activities. In his adult years, he loved maintaining a private pond, and working in the large vegetable and flower garden created and tended by his Grandmother, Lelia Foster, and Mother in the early 1900’s and taking a spin in his vintage Chris Craft. After graduating from the U.S. Army Officer Candidate School at Fort Belvoir, Virginia, he served as an Advisor to the Iowa Army National Guard in Des Moines, Iowa and as a Survivor Assistance Officer to next of kin. Always upbeat and fun, Tom’s circle of friends was multi-generational. His storytelling attracted attention and laughs from family and friends of all ages. He enjoyed playing golf and was always in North Dakota for opening day of pheasant season. He loved playing many card games -- bridge, gin rummy, euchre, and poker. He belonged to The Toledo Country Club, Ottawa Skeet Club, Monday Afternoon Study Club, The Answer Club, Chevaliers du Tastevin, The Crystal Director’s Circle at The Toledo Museum of Art, The Platinum Circle of the President’s Circle at The Toledo Zoo and Aquarium and the Lannon Society at The University of Toledo where he established The Thomas Baither Family Scholarship Fund. A long-time supporter of UT athletics, he has held football season tickets since 1966 and basketball season tickets since 1976. He also has been the primary sponsor of the UT Athletic Department annual golf outing since 1996. He served on the Finance Committee of the Foundation Board at The Toledo Zoo. He was a Board member of The Historic Woodlawn Cemetery, and The Boys and Girls Clubs receiving the National Service to Youth award for 10 years of devoted service. Tom is survived by his wife of 52 years, Karen, son, Thomas, Jr., daughter, Beckett Kimble, (Jeff), and two step-grandsons, Jonathon and Garrett. In lieu of flowers, please consider a donation to the Boys and Girls Clubs, 2250 North Detroit Avenue, Toledo, OH 43606-4641, The Toledo Zoo, 2700 Broadway, Toledo, OH 43609, Hospice of Northwest Ohio, 30000 East River Road 43551, or a charity of your choice. Arrangements have been entrusted to the Ansberg-West Funeral Directors 419-472-7633. To send his family online condolences, please visit www.ansbeberg-west.com. A memorial service will be held at the Toledo Country Club in April.

Thomas A. Baither died peacefully on Thursday, December 20 at Hospice of Northwestern Ohio after a battle with Merkle Cell Cancer. Tom was born on December... View Obituary & Service Information

The family of Thomas A. Baither created this Life Tributes page to make it easy to share your memories.

Thomas A. Baither died peacefully on Thursday, December 20 at...