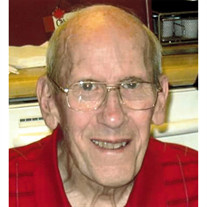 Thomas F. Hojnacki, 85, formerly of the West Toledo, passed away on Monday, September 18, 2017 in the Grove at Oakleaf Village. Tom was born on August 12, 1932 to Victor and Julia (Frankowski) Hojnacki. He was a graduate of St. Hedwig School and Macomber High School class of 1950. He was an Army veteran serving during the Korean War. He married Joann Kutchenriter on July 7, 1956 at Good Shepherd Church. They moved to the Library Village where they spent 59 happy years together and raised their children. Joann passed away in May 2016. Tom and Joann were long term parishioners of St. Agnes Church and later at St. Catherine of Siena Church. Tom worked at Toledo Edison for 40 years, starting as a truck driver and retiring as a supervisor for the Underground Lines in 1990. In his retirement, Tom enjoyed going to car shows and reading about vintage cars. He also spent time working on remodeling projects around his house as well as for family members. Tom also enjoyed collecting iron toy banks finding them at antique shows, flea markets, and as gifts. Tom is survived by his children, Thomas J. (Lorraine) Hojnacki of Northwood, Timothy (Julie) Hojnacki of Toledo, and Catherine (Ron) Breed of Toledo; grandchildren Nick (Melissa Doney) and Andy Breed of Toledo, Jennifer Hojnacki of Los Angeles, Daniel Hojnacki of Toledo, and Rachael Hojnacki of Northwood; one great grandchild Nate Breed of Toledo, and nephew John Gapski. In addition to his wife, he was preceded in death by his parents and his sister Doris Gapski We wish to thank the staff of The Grove as well as the nurses and aids from Great Lakes Caring Hospice for the excellent care they provided for Tom. Prayers will begin on Thursday, at 9:20 a.m., from the funeral home, followed by the Mass of Christian Burial, at 10 a.m., at St. Catherine of Siena Church, 4555 North Haven Avenue, with internment following at Toledo Memorial Park. Visitation will be on Wednesday, from 3-8 p.m. at the Ansberg-West Funeral Home, 3000 West Sylvania Avenue, (between Secor and Douglas Roads), where the rosary will be recited at 7 p.m. The family requests in lieu of flowers, tributes may be made to St. Catherine of Siena Church or a charity of the donor’s choice. Condolences may be expressed on line at www.ansberg-west.com

Thomas F. Hojnacki, 85, formerly of the West Toledo, passed away on Monday, September 18, 2017 in the Grove at Oakleaf Village. Tom was born on August 12, 1932 to Victor and Julia (Frankowski) Hojnacki. He was a graduate of St. Hedwig School... View Obituary & Service Information

The family of Thomas F. Hojnacki created this Life Tributes page to make it easy to share your memories.

Thomas F. Hojnacki, 85, formerly of the West Toledo, passed away...