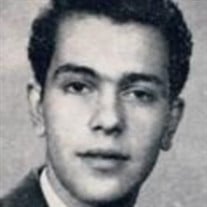 Thomas Papps passed away on January 23, 2021, after a productive and interesting life. He was born in Toledo, Ohio, to Christos and Maria Pappastamos in 1931, attended Woodward High School, received his bachelor's degree from Bowling Green State University and his Law Degree from Ohio State. He practiced law until his retirement in 1998. He enjoyed being a rebel in his practice and to follow his own rules. He quit the Toledo Bar Association two years after he joined as they permitted attorneys to contribute to the campaign of Judges. He refused to charge any client any amount that would make the client uncomfortable based on his interpretation of ancient Greek law and its demands for honor; reducing his income dramatically so that he estimated that 60% of his practice was at no cost to his clients. If he needed money, he tried a small or large injury case against an insurance company and made his living. He was a legal scholar and was the first attorney in the United States to file and win a suit in Pennsylvania on the theory of malpractice due to a failure to obtain informed consent, which is now the law in all the nation. In a criminal defense of an army court martial the defense he used to win caused the army to change its rules to ban such a defense. In Michigan, his one case was reported and then used by several major universities to teach the law of search and seizure. Another of his cases in the Supreme Court of Ohio established the law of deliberate tort in order to by-pass the laws of workman's compensation. In the Supreme Court of the United States against Thurgood Marshall, when he was solicitor general, he obtained a reduction of criminal sentence; after the case with different lawyers had certiorari denied. During and after his retirement he authored several books, one of which was recently published, "Eight Reasons for Divorce", "God Wore Glasses" and several others on the topics of ancient history and law are in the works to be published. He also authored several magazine articles on ancient history that were published in national journals; and he wrote much poetry, one of which won a national contest. He is survived by his wife, Wladyslawa Papps; step-daughter, Dr. Joanne Wojcieszek of Indianapolis; sister, Elizabeth Papps; daughter, Maria Papps (from whom he had been alienated); grand-daughters, Shoshana Lowinsky; grand-son, Ariel Lowinsky; Pietrzak Family: John, Irene, Paula; friends: Hela Zuzia, Greg Tarkowski, Grazyna and Anna Ramotowska, Heath and Regina Lein, Becky and John Skiadas, Arthur Henry and Mohammed Joseph. He passed in the presence of his wife, Lottie. He was a great husband, step-father and friend. We will hold his sweet memories in our hearts forever. Funeral Services at Holy Trinity Greek Orthodox Cathedral, 740 N. Superior, downtown Toledo, Saturday January 30, 2021 at 12 Noon. Viewing 11:00 a.m.

Thomas Papps passed away on January 23, 2021, after a productive and interesting life. He was born in Toledo, Ohio, to Christos and Maria Pappastamos in 1931, attended Woodward High School, received his bachelor's degree from Bowling Green State... View Obituary & Service Information

The family of Thomas G. Papps created this Life Tributes page to make it easy to share your memories.