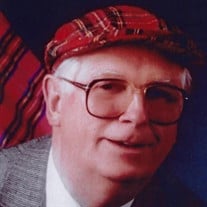 Thomas J. Stewart, 92, of Toledo, Ohio, died peacefully at home on Friday, October 16, 2020. He was born on July 21, 1928, in Linden, Michigan, to Minnie (Fox) and Thomas Milton Stewart. Thomas graduated from Linden High School. Thomas was employed by Sears, Roebuck, and Co. beginning in the advertising department in 1951 in Flint, Michigan. Subsequently, he worked in merchandising, and in 1963 was transferred to the Toledo, Ohio, Westgate store where he held several positions including contract sales manager. He retired in 1986. Thomas met the love of his life Barbara E. Ruzicka on a blind date and married her on August 16, 1947, at St. Mary Catholic Church in Flint, Michigan. It was a bond that thrived for 67 years. And all because these two people fell in love, Barb and Tom have a family legacy of ninety-seven. They were blessed with nine children: Barbara Ellen Fox, Elizabeth Stein, Susan (William) Stein, Thomas (Laurel) Stewart, James Stewart, Carol (Thomas) Ryan, Dorothy (Kevin) Switzer, William Stewart, and Kathleen (Gary, Jr.) Kuns. Also left to cherish his memory are his grandchildren: Lisa (Jason) Beymer, Duncan (Dottie) Stoker, Kristine (Robert) Kegerreis, Matthew (Samantha) Anderson, Leslie (John) Lynch, Christopher (Angela) Stein, Jason (Deborah) Stein, Jennifer Stein, Lynn (Kevin) Morrissey, Timothy (Sara) Stewart, Thomas Gerald (Jennifer) Stewart, Amanda (Jason) Kenyon, Katherine (Nicholas) Ricke, Jaqueline Stewart, Eric (Hillary) Ryan, Shawn (Allison) Ryan, Rebecca (Richard) Gibson, Andrew (Jaclyn) Ryan, Zachary Switzer, Tyler Switzer, Garrett Switzer, Gary Kuns, III, and Elizabeth Kuns. He treasured his great-grandchildren Eric, Alex, Tristan, Joseph, Mira, Joshua, Matisse, Charlotte, John, Sarah, Oliver, Brendan, Paige, Madeline, Lucas, Logan, Colin, Connor, Caleb, Reagan, Shea, Owen, Michael, Meghan, Thomas Jakob, Tyler, Jackie, Brie, Jaxon, Nathaniel, Benjamin, Kane, Carter, Lane, Eli, Henry, Claire, Grace, Caden, and his great-great-grandchild Connor. He was preceded in death by his beautiful bride, Barbara; sons-in-law Richard Fox and Donald Stein; daughter-in-law Angela Stewart; and grandson Travis Ryan. Also predeceasing Thomas are his sisters Harriet Smith and Eileen Miller, and brother Roy Rathbun. Thomas had a passion for so many things in life. Learning. He was a self-taught craftsman who shared with others his joy of creating and completing so many “thirty-day” projects always emphasizing the “measure twice, cut once” adage. Humor. He had a flair for a great joke which he would tell over and over. He had a contagious laugh. Geneology. He impressed on so many why it was important to know where you came from. He was so proud of his Scottish heritage. Family. The thousands of activities including sporting events, contests, recitals, concerts, plays, receptions, and banquets his grands took part in gave him so much joy. His family always brought a smile to his face. He never missed the opportunity to tell each how special and appreciated they were. Dad, Grandpa, Uncle, Friend, we give those words you said so often right back to you. Love you! Proud of you! Friends are invited to visit from 3:00pm to 8:00pm Wednesday, October 21, 2020 at Ansberg-West Funeral Home, 3000 Sylvania Avenue, where the Rosary will be recited at 7:00pm. All state mandated precautions regarding facial coverings and social distancing will be strictly enforced for all services. Mass of the Resurrection will be celebrated 11:00am Thursday, October 22, 2020 at Gesu Church, 2049 Parkside Blvd. Due to current conditions caused by the ongoing pandemic, we are offering a Live Stream of the Funeral Mass for Thomas beginning at 10:45am for those who wish to attend the Mass virtually. To view the video of Thomas’ Funeral Mass, please click here. Interment will follow in Resurrection Cemetery. Memorial contributions may be made to the charity of the donor’s choice.

The family of Thomas J. Stewart created this Life Tributes page to make it easy to share your memories.