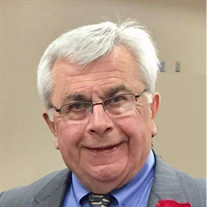 Timothy James Martin, age 69 years, of Waterville, Ohio, peacefully passed away at Wood County Hospital on July 9, 2021, surrounded by loved ones, after a difficult battle with cancer. Tim was born on October 21, 1951 in Toledo, OH, the son of the late Robert James and Ardath Joyce (Barr) Martin. He was a proud graduate of Central Catholic High School, Class of 1969. His first job was as a grain inspector at the Cargill Grain Elevators, located on Miami Street in East Toledo. He joined the US Marine Corp and served in the Marine Corp Reserves from 1971-1977. Tim found his passion in the insurance business and started working for his father at Kalmbach-Martin Insurance. He merged companies in 1986 and co-owned Martin Lark Insurance with John Lark for 23 years. Tim’s philanthropy undoubtedly touched the lives of many people in the Toledo community. Tim started volunteering for the East Toledo Family Center in 1984. He served on the Board of Trustees in the 1980’s and 90’s and also served as Treasurer. He has remained a Lifetime Board Member of the Family Center, serving as founder and chairman for the Family Center’s Annual Golf Outing, benefiting their sports programs. He received the Dorie Steinmetz Memorial Community Service Award in 1996 and the ETFC Distinguished Citizen Award in 2013. Tim was a founding Charter member of the Exchange Club of Greater Maumee Bay started in 1987. He was also a member of the East Toledo Club, was a chairman for 6 years at River East Associates, and volunteered his time at the East Toledo Christmas Parade for over 25 years. Tim was a 32nd degree Scottish Rite Mason and proud member of the Rubicon Masonic Lodge #237 since 2014. He served as the Lodge Education Officer and was awarded the Grand Master’s Community Service Award in 2017. Tim also belonged to the Zenobia Shriners since 2016 and was currently the president of the Evzones Unit. He was proud to be a volunteer at the Zenobia Shrine Circus which proceeds to help the Shriners Hospitals. When Tim was not serving the Toledo Community, he loved playing golf and volunteering for the LPGA Marathon Classic. He also loved attending his granddaughter’s sporting events and school functions. Tim is preceded in death by his parents and his sister, Ann Dobbs. He is survived by his daughter, Cheryl (Dominic) LoFiego; grandchildren, Isabella LoFiego and Lily LoFiego; his brothers, Robert (Louisa) Martin and Donald Martin; and nieces and nephews, James (Audra) Martin, Mathew Martin, Janine (Josh) Dailey, and Justin (Erin) Dobbs. Memorial services will be held at Ansberg-West Funeral Home, 3000 W Sylvania Ave, Toledo OH 43613, on Friday, July 23 from 2 p.m. to 8 p.m. where military services will take place at 4 p.m., Rosary at 6:30pm and Masonic services will begin at 7:00pm. The Funeral mass will be held on Saturday, July 24 at 11 a.m. at The Most Blessed Sacrament Parish, 2240 Castlewood Drive, Toledo OH 43613 with a reception immediately following in the Kelly Room.

Timothy James Martin, age 69 years, of Waterville, Ohio, peacefully passed away at Wood County Hospital on July 9, 2021, surrounded by loved ones, after a difficult battle with cancer. Tim was born on October 21, 1951 in Toledo, OH, the son... View Obituary & Service Information

The family of Timothy James Martin created this Life Tributes page to make it easy to share your memories.