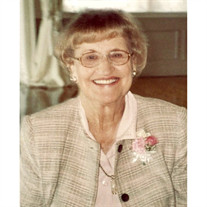 Verla R. Harper, age 94, of south Toledo passed away Saturday, January 16, 2016, at Lutheran Village at Wolf Creek. Verla was born September 11, 1921, in Haskins, Ohio to Tressa and Luther Cheatwood. She graduated from Haskins High School, class of 1939, and also from Davis Business College. Her first job was at the France Stone Company corporate office, where she met her future husband. Verla married William Charles Dunbar on August 31, 1946. They had two children, Susan and James. Tragically, William and James preceded her in death due to a car accident on Christmas Day 1965. She also worked for 10 years at Kaiser Jeep as secretary to the manager of the Latin American Division. In 1966 she returned to France Stone Company and worked as an executive secretary until her retirement in 1991 at the age of 70. On March 30, 1968, she married Willis "Gene" Harper and they lived happily together until his death in 2011. Verla was a member of Aldersgate United Methodist Church for over 50 years. She also was a member of Heatherdowns Country Club where she belonged to the 18 hole golferettes group. She was a member of Monroe Central Business and Professional Women's Club. She loved to play bridge and belonged to several bridge groups, playing until the age of 90. She also enjoyed traveling. Verla is survived by her daughter, Sue (William Harold) Keaton; four grandchildren, William Harold II (Julie) Keaton, Kelly (John) Labrie, Wesley (Nikki) Keaton and Corey Keaton; six great-grandchildren, Joel Keaton, Nicholas Keaton, Wesley Keaton, Laura Labrie, Kiera Keaton and Grace Keaton; daughters by marriage, Sue (AI) Pattillo, Sandy Harper and Pam (Tab) Davis; also surviving are her nieces and nephews. She was preceded in death by her parents, her first husband, William Charles Dunbar; son, James Dunbar; husband, Willis Gene Harper; brother, Dorman Cheatwood, and sister, Burnetta Billings. Visitation will be on Thursday, January 21st from 3-8 p.m. at Ansberg West Funeral Home, 3000 West Sylvania Ave., Toledo, Ohio. Services will be held Friday, January 22nd at 11 a.m. at Aldersgate United Methodist Church, 4030 Douglas Rd., Toledo, Ohio, with visitation from 10-11 a.m. Interment will be at Ottawa Hills Memorial Park. Contributions may be made to the Aldersgate United Church memorial fund or to Hospice of Northwest Ohio. Condolences for Verla's family may be expressed at www.ansberg-west.com The family would like to thank the staff from Lutheran Village at Wolf Creek and Hospice of Northwest Ohio for the care that was provided to Verla.

The family of Verla Ruth Harper created this Life Tributes page to make it easy to share your memories.