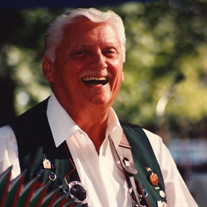 It is with heavy hearts that we announce the passing of Vernon J. Basilius. He passed away March 20, 2020 at Aspen Grove, surrounded by his family at the age of 87. He was born June 19, 1932 to Otto and Marie Basilius in Toledo. Vern was a graduate of Macomber High School, Class of 1950. He honorably served his country in the Navy during the Korean Conflict and recently was a proud participant on an Honor Flight to Washington D.C. Vern joined his father working at Basilius Tool Co. and operated the business with his family until his retirement. Vern’s father, Otto also passed along a profound love of music to his son at an early age. They played together in a band called Edelweiss. Vern was a gifted entertainer, playing the banjo and guitar as well singing and yodeling. He performed in a German band called the Tiroler’s as well as with his Irish friend John Connolly. He also enjoyed helping Jack, Jeff and Hans with the German American Hour, Sunday morning radio show. Vern was proud of his heritage and worked tirelessly to build the G.A.F Society, he relished the time he spent at Oak Shade Grove and at the German American Festival. He and his son, Chris were active in Indian Guides together and will be “pal’s forever” He enjoyed going to movies at the Jesse James Drive In, traveling to Sanibel Island and Disney World and listening to Glen Campbell. An avid golfer, he was “lucky” enough to have a hole in one. He will be remembered as a dedicated husband and father, who was hardworking, honest and a true gentleman, who will be deeply missed by all who knew him. Vern is survived by his daughter, Kimberly (Dewey Ayers) Czerniak; son, Christopher (Terry) Basilius; grandsons, Chad, Jacob and Jordan Czerniak and Jason, Josh and Jacob Opaczewski and special friend, Amy Pullen. He was preceded in death by his wife, Joyce; brother, Donald W. Basilius and sister, Carol Keiser. Special thanks to Aspen Grove and ProMedica Hospice for the exceptional care given to Vern. Due to the Covid-19 gathering restrictions, services will be private, however a livestream for viewing the service is available at online by clicking here https://vimeo.com/399927211, starting at 11:45am. A celebration of Vern’s life will be held at a later date. He will be interred in Ottawa Hills Memorial Park. Memorial contributions may be made to the charity of the donor’s choice.

It is with heavy hearts that we announce the passing of Vernon J. Basilius. He passed away March 20, 2020 at Aspen Grove, surrounded by his family at the age of 87. He was born June 19, 1932 to Otto and Marie Basilius in Toledo. Vern was... View Obituary & Service Information

The family of Vernon James Basilius created this Life Tributes page to make it easy to share your memories.

It is with heavy hearts that we announce the passing of Vernon...