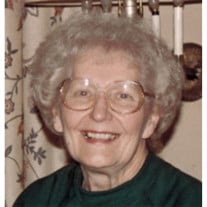 CURTIS Vickie Vickie Curtis, 93, of Toledo, passed away Tuesday, July 19, 2016, at Spring Meadows Care Center. She was born March 8, 1923, in Montreal, Canada. In her younger years Vickie worked for Legal News. She married Dwight Curtis in 1947 and he preceded her in death on October 15, 1997, after 50 years of marriage. She was also preceded in death by her daughter, Peggy Lynn Curtis, at the age of 15, in 1965, and her son-in-law, James Hartbarger. Vickie and her husband owned and operated the Scott Park Restaurant for 22 years. They also owned the South Side Market in Findlay, OH for 11 years. Vickie was a member of the Toledo Artists Club and was a lifetime member of the Disabled American Veterans Auxiliary. Vickie leaves behind to cherish her memory, daughter, Barbara Hartbarger; 2 terrific grandsons, Neil (Laura) Hartbarger and David Hartbarger and great-grandsons, Alexander and Zachary Hartbarger. Friends are invited to visit on Friday, July 22nd, from 10 a.m. until the funeral service at 11 a.m., in the Ansberg-West Funeral Home, 3000 Sylvania Avenue, (between Secor and Douglas Roads). Interment will follow in Historic Woodlawn Cemetery. Memorial contributions may be made to Hospice of Northwest Ohio or the donor’s favorite charity. Online condolences may be made to the family at www.ansberg-west.com

The family of Vickie Curtis created this Life Tributes page to make it easy to share your memories.