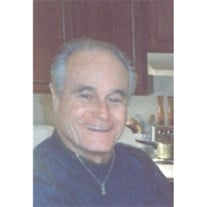 Virgil L. Tremblay, 92, passed away peacefully on March 26, 2014 at Hospice of Northwest Ohio surrounded by his loving family. He was born on October 5, 1921 to Lawrence and Ruth (Richmond) Tremblay in Newcomb, Tennessee. By the age of ten, he had lived in five states following his father who worked in the logging industry. He graduated from Seneca High School in Buffalo, NY with honors and enlisted in the U.S. Naval Cadet Program to become an aviator. During WWII as a Lieutenant Senior, he instructed both U.S. and French navel cadets how to fly fighter planes. Knowing the value of hard work instilled in him at an early age, Virgil excelled in several jobs after the war. He was a painter, rigger, sewing machine manager, and a real estate salesman/broker for Sawicki Realty and Tremblay and Associates Realtors showing pride in everything that he did and bestowing integrity and craftsmanship. Virgil was best known as a custom home builder in the greater Toledo area for over thirty years working side by side with his sons for Tremblay Custom Builders. Virgil was also an avid sports fan. He was often seen wearing his favorite team logos and colors especially that of the Tennessee Volunteers, Buffalo Bills, and Detroit Tigers. His greatest joy, though, came from watching his sons and grandsons sporting events. Rarely milling a game, he was their biggest fan. In addition to his love for country and family, Virgil was strong in his faith in God being a longtime member and servant of the First Baptist Church of Greater Toledo where he taught Sunday school and sang in the choir. In his later years, he spent much of his time writing memoirs and religious writings depicting his strong faith in the Lord. Virgil will be remembered as a dedicated and loving husband, father, grandfather, and great-grandfather. He was preceded in death by his parents and sister, Violet. He is survived by his loving wife of 70 years, Bernice; sons, Michael (Monique) and John (Cheryl); grandsons, Timothy, Chad, Mathew, and Christopher; great-grandsons Jonah and Jacob. The family wishes to extend their deep gratitude for the wonderful medical care provided by Dr. Randy Climo, Dr. Kesari Sarikonda, and the compassionate staff of Hospice of Northwest Ohio. Special and sincere thanks are also extended to faithful friends, Al Kern, Tom and Flossie Townsend and Tom and Kathy Young. Virgil’s family will receive friends after 10:00am on Saturday April 26, 2014 at the First Baptist Church, 6520 Pilliod Road, in Holland where a memorial service will immediately follow beginning at 11:00am. A luncheon will be held at the church following the service. A private family burial will take place in Jellico, Tennessee at a later date. Memorial contributions may be made to First Baptist Church or Hospice of Northwest Ohio.

Virgil L. Tremblay, 92, passed away peacefully on March 26, 2014 at Hospice of Northwest Ohio surrounded by his loving family. He was born on October 5, 1921 to Lawrence and Ruth (Richmond) Tremblay in Newcomb, Tennessee. By the age of ten,... View Obituary & Service Information

The family of Virgil L. Tremblay created this Life Tributes page to make it easy to share your memories.