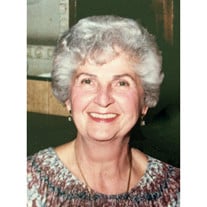 Virginia R. Kohn died October 12, 2015 at Swan Creek Retirement Village. She was 97 years old. She was born to Harry and Bertha (Boltin) Renn in Toledo, Ohio on September 8, 1918. She was a graduate of Devilbiss High School and Davis Business College. After Davis Business College, she was employed as a claims clerk at Aetna Insurance and Ohio Finance. During WWII, she volunteered at Riverside Hospital as a Gray Lady for the American Red Cross. She was married in 1941 to Wayne Kohn and celebrated sixty-nine years of marriage with him. They raised three children in Point Place. When her children were older, she returned to work as a library clerk at Point Place Public Library until her retirement. Mrs. Kohn was very active in civic and community affairs. She was a member and past President of the YWCA Young Matrons and was a supporter of the local Shriners and Shriners Hospitals for Children through the Lady Shrine. She was a member of the Toledo Towne Club, a women’s organization dedicated to friendship and philanthropy and was actively involved with First Baptist Church of Greater Toledo where she taught Sunday School and served as a Deaconess and Deaconess Emeritus. After retirement, she and her husband traveled extensively, often staying in Elderhostels, some of which were located on college campuses where they attended classes taught by local faculty. They instilled in their children a love of reading and a desire to never stop learning new things. She started painting classes in her 70’s and became quite good with watercolor painting. She kept herself mentally and physically healthy by exercising in the cold Canada water of her vacation home until she was 89 and playing bridge until she was 96. Her greatest gift was her service to others through volunteering – a virtue she learned from her own parents. She and her husband: volunteered at Riverside and Flower Hospitals; were naturalist guides at the MetroParks for kindergartners; delivered meals to shut-ins through Mobile Meals; and, served others through numerous church activities. Her greatest joy was her love of hospitality and entertaining friends and family in the many beautiful parties she and her husband hosted. Through an international student exchange program, she and her husband welcomed a Chilean high school student into their home for a year. Miguel lived with them and their youngest son, Kevin, while they were both students at Woodward High School. Miguel became “a part of the family” as a result of the experience and has visited and kept in touch for the fifty years since. Her greatest blessings were her family. She is survived by sons, Jeffery (Rachel) Kohn, Kevin (Andrea) Kohn, and daughter, Kristin Kohn (Tom) Kahl and by grandchildren, Tiffany Kohn (Adam) Williams, Eric (Jenny) Kahl, Stephanie Kahl (Adam) Shelton, and Eric Whitener. She has nine great grandchildren: Jacob and Hailey Kahl, Joshua and Ryan Shelton, Gabrielle, Camberlie, Jamieson, and Allora Williams, and Paige Whitener. She is also survived by her sister, Barbara (Renn) Plunkett and numerous nieces and nephews. Memorial services will be held at First Baptist Church of Greater Toledo on Friday, October 30, 2015 at 10:30 AM where friends can visit from 10:00 to 10:30 AM. The family requests that memorial contributions be made to the First Baptist Church of Greater Toledo Endowment Fund or the Wayne and Virginia Kohn Student Intern and Lay Education Fund. Arrangements have been entrusted to the Ansberg-West Funeral Directors. To send the family online condolences, please visit www.ansberg-west.com

Virginia R. Kohn died October 12, 2015 at Swan Creek Retirement Village. She was 97 years old. She was born to Harry and Bertha (Boltin) Renn in Toledo, Ohio on September 8, 1918. She was a graduate of Devilbiss High School and Davis Business... View Obituary & Service Information

The family of Virginia Ruth Kohn created this Life Tributes page to make it easy to share your memories.