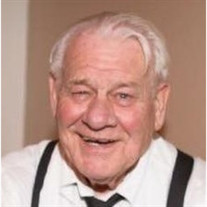 Wally Gedeon, 79, of Toledo passed away peacefully Wednesday May 11, 2016 surrounded by his loving family at Hospice of NW Ohio in Perrysburg. He was born in Parma, Ohio on April 30, 1937 to Walter and Ann Gedeon. He married the love of his life, Ann Bass, on August 29, 1959. Together they raised 5 beautiful children. Admiral Merchants Motor Freight brought Wally's family to Toledo in 1967. His 50 year career took him to several companies ending in his retirement in 2008 as a co-owner of OMI Transportation, a company he started in 1991. Wally was very active in many clubs, even acting as president of the Toledo Transportation Club. Wally enjoyed his time in the transportation industry and he treasured the friendship of so many co-workers and customers. He will be remembered for his integrity, sense of humor and willingness to mentor others. Being born and raised in Cleveland, Wally was a loyal Cleveland Browns fan to the very end, although they disappointed him year after year. He loved spending time with his grandchildren, attending many of their events and always being their biggest fan. Wally enjoyed nothing more than time spent with his family and was a wonderful example of a husband, dad, and grandpa who was always there for them whenever he was needed. He was full of fun, generous, kind and honest and will be truly missed by all who knew him. Wally appreciated the compassionate care he received from many nurses over the course of his illness especially his hospice nurse, Colleen. He is survived by his loving wife of 56 years, Ann; his sons Steven (Jane), Michael (Debra); his daughters, Laura Langenderfer (Terence), Susan Woodward (Greg), and Barbara Doherty and brother, Raymond and sister Laverne Sepich. He was blessed with many grandchildren, great grandchildren, nieces and nephews. Along with his parents he was preceded in death by his sister Rosemary and Brother Bud. Friends may visit the family on Monday May 16, 2016 from 2:00-8:00pm at Ansberg-West Funeral Home, 3000 Sylvania Ave. where a Rosary will be recited at 7:00pm. Prayers will begin at the funeral home at 9:30am and will be immediately followed by a funeral mass begining at 10:00am Tuesday at Christ the King Church, 4100 Harvest Ln. Rev. William Rose Officiant. Interment will be in Resurrection Cemetery. Those wishing to make memorial contributions are asked to consider Hospice of Northwest Ohio or the Charity of the Donor’s Choice. To send his family online condolences, please visit www.ansberg-west.com.

Wally Gedeon, 79, of Toledo passed away peacefully Wednesday May 11, 2016 surrounded by his loving family at Hospice of NW Ohio in Perrysburg. He was born in Parma, Ohio on April 30, 1937 to Walter and Ann Gedeon. He married the love of his... View Obituary & Service Information

The family of Walter A. Gedeon created this Life Tributes page to make it easy to share your memories.