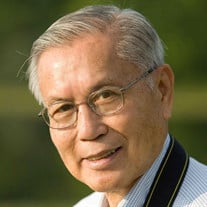 Wan Jung, 91, beloved father, grandfather, uncle, cousin, friend..., passed peacefully in his sleep, early in the morning of Thursday, October 3, 2019. He was in hospice care at Wesley Glen Retirement Community, Columbus, OH. Wan was born August 18, 1928, in Canton, China. He lived in Toledo, OH for the majority of his life, but moved to Columbus to be near his daughter, after retirement. Wan graduated from Scott High School and The University of Toledo. He served proudly in the U.S. Army as a translator during the Korean War. For almost 40 years after his military service, he was a dedicated math and science teacher, inspiring students at McCord and Arbor Hills Junior High Schools, and Sylvania Southview High School. When he wasn't teaching, Wan was a talented photographer who enjoyed utilizing his hobby on the weekends as a wedding photographer. He was most often seen with a camera in hand and was quickly entranced with the quality of the iPhone cameras and their compact size. He was also a skillful woodworker, and spent many years teaching woodshop at the YMCA and the Boys' Club of Toledo, where he made multiple lifelong friends. He was an avid model airplane builder and flyer. He uniquely preferred the challenge of designing his own airplanes over building model kit planes. Wan was preceded in death by parents, Henry and Yok Yip Jung; brothers, George Jung (Toledo), Ben Jung (Vancouver); and sisters, Choi Mei Jung Hum (Montreal) and Choi Kam Jung Tham (India). Wan is survived by his daughter, Diana Stacey; son-in-law, Mike Stacey; granddaughters, Autumn (21) and Carissa (19); as well many cherished nieces, nephews, cousins and second cousins, too numerous to mention each by name. A celebration of Wan’s life will be held on Monday, October 28th, from 11 a.m.-2 p.m., at the Ansberg-West Funeral Home, 3000 Sylvania Avenue, Toledo, Ohio 43613, (between Secor and Douglas Roads), where a short memorial service will begin at 2 p.m.. Immediately following the memorial service, family and friends are invited to join the family for the committal service at Historic Woodlawn Cemetery, 1502 West Central Avenue., Toledo, OH 43606. In lieu of flowers please consider a contribution in Wan’s memory to, Read for Literacy, 325 North Michigan Street, Toledo, OH 43604 or Wesley Glen Charitable Care Fund, 5155 North High Street, Columbus, OH 43214. Wan’s family would like to express their appreciation to all of the caring staff at Wesley Glen, who’ve treated Wan like their extended family.

The family of Wan J. Jung created this Life Tributes page to make it easy to share your memories.