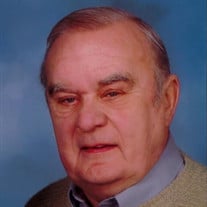 William R. “Bill” Claucherty, 91, of Toledo, OH, passed away on Tuesday, May 18, 2021, at his home. He was born October 22, 1929, in Jackson, MI and was the son of Harold and Esther (Nicolay) Claucherty. Bill attended Jackson High School, Jackson Junior College and was a graduate of the University of Michigan, College of Engineering. He married Barbara (Schlenker) Claucherty on May 22, 1954. Bill served honorably in the Army Airborne for 2 years (1951– 53), during the Korean War. Bill worked for Owens-Illinois as a mechanical engineer, which took him throughout the United States, Europe and South America. He retired in 1995, after 38 years. Bill was a member of University of Michigan Alumni Association and Memorial Lutheran Church for 64 years. He enjoyed refinishing furniture and traveling especially to Florida, Aruba and the Outer Banks. He was a lifelong fan of the University of Michigan Wolverines, Detroit Tigers and Toledo Mud Hens. Bill is survived by his wife, Barbara Claucherty; children, Gail Claucherty, Mansfield, OH, Michael (Deborah) Claucherty, Perrysburg, OH, Robin Claucherty, Columbus, OH and Susan (Lee) Avina, Sylvania, OH; grandchildren, Sarah, Samuel and Rachel Avina; siblings: Gordon (LouAnn) Claucherty, Gerardstown, WV, Douglas (Janice) Claucherty, Indian Springs, OH, Jennifer (Michael) Way, Jackson, MI and several nieces and nephews. He was preceded in death by his parents. A memorial service will be private. Contributions, in memory of Bill, may be made to Memorial Lutheran Church or ProMedica Hospice. Bill’s family would like to extend a special thank you to the staffs at St. Anne’s ICU and ProMedica Hospice, for the wonderful care given to Bill.

The family of William "Bill" R. Claucherty created this Life Tributes page to make it easy to share your memories.