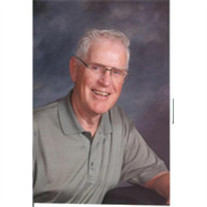 William E. "Bill" Hill, 73, of Toledo, passed away Sunday, May 27, 2007, at Hospice of Northwest Ohio, in Toledo. He was born September 6, 1933 in Toledo. Bill was U.S. Navy Veteran and a member of Christ the King Catholic Church, for 27 years. He was an electrician at GM Powertrain for over 28 years, retiring in 1998. Bill was an avid bowler and enjoyed golf. Survivors include his loving wife of 47 years, Carol Hill; sons, Greg (Theresa) Hill and Scott (Tina) Hill; grandchildren, Michael Hill, Patrick Hill and Allyssa Hill and his sister, Maggi Hill of Mesa, AZ. Bill was preceded in death by his mother, Ruth and his brother, Art. Friends are invited to visit from 2-8:30 p.m. Wednesday, in the Ansberg-West Funeral Home, 3000 Sylvania Avenue, where a scripture service will be held at 7 p.m. Prayers will begin at 9:30 a.m. Thursday, from the funeral home followed by the Funeral Mass at 10 a.m., in Christ the King Church. Father Tommy Rodrigues will officiate. Interment in Calvary Cemetery. The family would like to thank Lisa and the entire staff at Hospice of Northwest Ohio for all their compassion and care for Bill. Memorial contributions, in Bill's memory, may be made to Hospice of Northwest Ohio, 30000 River Road, Perrysburg, OH 43551.

The family of William E. Hill created this Life Tributes page to make it easy to share your memories.