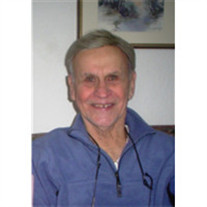 William A. Pollauf, age 88, passed away Sunday October 7, 2012 at Ebeid Hospice. Born on September 29, 1924 to Andrew and Rosebeth Pollauf, Bill lived his entire life in Toledo. A graduate of Waite High School, class of 1942, Bill also attended the University of Toledo. He honorably served his country in the Navy during World War II from 1943 to 1946. He was a research and development lab technician at Textileleather for 40 years before retiring in 1986. Bill had a lifelong passion for art. A gifted artist, he enjoyed working with water colors, oils, pastels, acrylics, sculpture and stained glass. During his later years, Bill spent many hours shooting pool with friends at the Eleanor Kahle Senior Center. Bill is survived by his children, Beth (Gary) Petsche, Lynne Walters (Tony Mollica), Drew Pollauf; grandchildren, Shawna (Brad), Lisa (Tim), John (Nicole), Jamie (Kristi) and Chris; great grandchildren, Kaylee, Taylor, Bryson, Hunter and Hailey; special nieces and their families. He was preceded in death by his loving wife, Velma in 2008; brother, Robert A. Pollauf and sister, Betty Crawford. Special thanks to the staff at Ebeid Hospice for the exceptional and compassionate care given to Bill and their support for his family. Friends are invited to visit from 2:00 to 8:00pm Wednesday at the Ansberg-West Funeral Home 3000 Sylvania Avenue where funeral services will be held at 1:00pm Thursday. Interment will take place in Ottawa Hills Memorial Park. Memorial contributions may be made to Ebeid Hospice. Condolences may be left at www.ansberg-west.com

The family of William A Pollauf created this Life Tributes page to make it easy to share your memories.