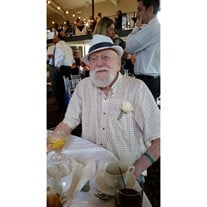 Willis (Bill) Rofkar, 89 years, passed away Monday, May 23, 2016. He was born on October 18, 1926, Alaska Day. He was the second of four sons of Edwin and Ella Rofkar. He was preceded in death by his parents and brothers Edwin Jr., Richard, and Donald. He attended Longfellow School and Devilbiss High School and was a proud supporter of the Tigers. Bill was a WWII veteran and participated in the Honor Flight to Washington D.C. with his son. The trip was a real highlight for him. After he completed his service, he married Jeanne Kaltenmark and had six children. Family was very important to him. He was a long-time member of St. Clement’s Parish and was active in Scouting for many years. Bill was an avid reader and a lifelong learner. He enjoyed the outdoors, especially the Toledo Metroparks, the Toledo Zoo, and trips to Catawba Island. He spent his childhood summers working on his Grandfather’s farm and orchard with all of his cousins and liked going back and keeping in touch with those that remained in Catawba. In his later years as he battled physical limitations, he increased his cognitive exercises with mental puzzles such as the New York Times Crossword, Sudoku puzzles, and watching Jeopardy. Willis is survived by his six children: Denny (Teri), Karl (Carolyn), Ray (Linda), Karen (Rich) Forsythe, Becky (Ray) Macheda, and Theresa (Greg) Hill. He enjoyed his eleven grandchildren: Eric (Amy), Erin, Paul, Kari (Mike) Adcock, Graig, Neil (Jamie), Jordan (Whitney), Kalena (Ryan) Falk, Kelsey, Jen Forsythe, and Allyssa Hill. He was fortunate enough to experience seven great-grandchildren as well: Michael Albritton, Devin Albritton, Violet Harrison, Mackenzie Rofkar, Benton Falk, Leighton Falk, Mara Falk, Keaton Turner and Ivy Malley. Visitation will be held at Ansberg-West Funeral Home, 3000 W. Sylvania Ave., Toledo, OH 43613, on Wednesday, June 1st, 2016 from 2:00pm - 8:00pm. Funeral service will be held on Thursday, June 2nd, 2016 at 11:00am at Ansberg-West Funeral Home, Rev. James Auth Officiant. Interment and military honors will follow at Catawba Cemetery at 1:00pm. In lieu of flowers, memorial donations may be made to the Juvenile Diabetes Foundation, The American Heart Association, or The Muscular Dystrophy Association. The family of Willis Rofkar would like to thank the staffs at Sunset House, Merit House, and Hospice of Northwest Ohio. To send his family online condolences, please visit www.ansberg-west.com.

Willis (Bill) Rofkar, 89 years, passed away Monday, May 23, 2016. He was born on October 18, 1926, Alaska Day. He was the second of four sons of Edwin and Ella Rofkar. He was preceded in death by his parents and brothers Edwin Jr., Richard,... View Obituary & Service Information

The family of Willis R. Rofkar created this Life Tributes page to make it easy to share your memories.