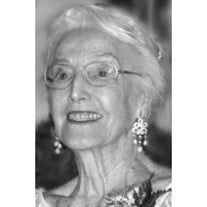 Olga Christina Boone, 104, slipped the bonds of this earth on January 10, 2013, as her loving family sang hymns by her bedside in her home in Sylvania. “Inspiring” is the word most often used to describe Olga - a teacher, dancer, world traveler, public speaker and storyteller known and loved for her zest for life and generosity of spirit. Olga moved to Sylvania when she was 88 and soon resumed an active professional life of presenting workshops, inspirational talks and storytelling. She delighted audiences at nursing homes, churches,libraries and Lourdes University. She received a standing ovation as the keynote speaker at the annual gathering of the Area Office of Aging when she was 101, and gave the welcoming remarks to the same group the following year, again sharing the platform with Congresswoman Marcy Kaptur. That year she also received accolades for performing an exhibition waltz at the Sylvania Spring Fling Senior Expo. Olga was born in Minneapolis on September 28, 1908 to Swedish immigrants, Gustaf and Ellen Lofgren. They loved this country and believed strongly in education. Their hard work made it possible for Olga to graduate from Central High School in Washington, DC and then attain a B.P.E. in Physical Education from Marjorie Webster College, a B.S. from the University of Maryland in Education, and then an M.A. ??" all during the years of the Depression. And in the midst of her educational pursuits, she also became Miss Maryland! Most of Olga's life was spent in the Washington, D.C. area where she raised her family and pursued her professional careers. Olga taught others all her life, from pre-school through college; from Sidwell Friends private school where U.S. President's children have attended, to a detention home for girls, to congressional wives, to Sunday School; and subjects from Dancing to Etiquette to English-as-a-Second Language to Speech. She retired from Washington D.C. public schools as a Speech Pathologist in 1977. Later that year she moved to Jekyll Island, Georgia. Her involvement with the Brunswick GA Library led to her beginning a new career as a storyteller. Her portrayals included Eleanor Roosevelt (whom she met while in college), Susanna Wesley, and Mrs. Claus. Olga felt a close bond to libraries; she had typed her Master's thesis on a typewriter at the D.C. Public Library in 1936 (for 10 cents an hour). She was a member of Friends of the Library in Georgia and Toledo, and donated a Bookmobile to the Brunswick Library. Physically active all her life, she taught exercise to seniors at the Sea Island Cloister into her late 80's. Olga loved dancing. As a young woman, she danced on the stage in Washington D.C. at the Fox Theatre and led her own troupe, the Olga Lofgren Dancers. A hip replacement at the age of 88 did not deter her; she resumed ballroom dancing and performed locally on various stages until she was 102, including for the Perrysburg Public Library fundraiser. Throughout her life, Olga greeted each new adventure with openness and enthusiasm ??" whether teaching inner city children, or gathering family members together in Sweden, or exchanging gifts with a member of the Maasai whom she met while on an African safari, or falling off a camel during a visit to the Middle East. Olga found something praiseworthy in everyone she met, brightening their lives. Even when dying, she taught us grace and elegance and love for God and for other people. She uplifted the spirits of her medical caregivers with her humor, joie de vivre, and kindness. Her last words to her family were a reminder “to love other people, to be kind, and to forgive.” Olga Christina was preceded in death by her husband, James D. Boone, a violinist whom she had met when they jointly presented musical programs at nursing homes and other venues. She is survived by daughters, Ellen Christina Boone and Julia Boone Lee of Florida, and by granddaughters, Anna Christina Bahow of Chicago, Karen Bahow of St. Louis, and Meg (Chas) McBrien of Wilkes-Barre. The family expresses gratitude to caregivers from Visiting Angels, especially Barbara with whom Olga shared many projects and even more laughs, to family friend Bill Emery, to Olga's kind neighbors, and to Hospice of Northwest Ohio. In lieu of flowers, the family suggests donations to the Olga Christina Boone scholarship fund at Lourdes University or to Monroe St. United Methodist Church. A service to celebrate Olga's amazing life will be held at 11 a.m. on Saturday, January 26, 2013, at Monroe St. United Methodist Church. There will be a harpist and special music.

Olga Christina Boone, 104, slipped the bonds of this earth on January 10, 2013, as her loving family sang hymns by her bedside in her home in Sylvania. &#8220;Inspiring&#8221; is the word most often used to describe Olga - a teacher, dancer,... View Obituary & Service Information

The family of Olga Christina Boone created this Life Tributes page to make it easy to share your memories.

Olga Christina Boone, 104, slipped the bonds of this earth on...